The Game Grumps are a duo of Internet gaming personalities, Arin and Dan. Through the Player's actions, they can be made to arrive at the party, although they spend their entire visit trying to leave.

About the Game Grumps[]

Leigh Daniel Avidan (born March 14, 1979), also known by his stage name Danny Sexbang, is an American musician, Internet personality, singer-songwriter, comedian, and actor. He is one half of the musical comedy duo Ninja Sex Party with Brian Wecht, as well as the co-host of the Let’s Play webseries Game Grumps with Arin Hanson. He is also part of the video game-based comedy music trio Starbomb, alongside Hanson and Wecht. -HousePartyGame.com character bio

Dan serves as something of a voice of reason for Arin's chaotic gung-ho behavior, advising Arin against several actions, but still supporting him after the plan predictably goes awry.

Dan is the more musically inclined of the pair, briefly breaking into song in background chatter and in select opportunities. He also enjoys Dungeons and Dragons, serving as Dungeon Master during one attempt to leave the house, and with Rachael using it as a common interest to flirt with Dan.

Arin Joseph Hanson (born January 6, 1987), also known by his Internet pseudonym Egoraptor, is an American Internet personality, animator, and voice actor. He is well known for his Internet animations, as well as being the co-founder and co-star of the popular YouTube Let’s Play webseries Game Grumps. He is also a member of the video game-based parody musical trio Starbomb. -HousePartyGame.com character bio

Arin comes up with several schemes to leave the party, including jumping the fence with his Florida-honed fence-jumping ability, convincing guests to give him their car keys or cell phones under the guise of a DnD campaign, and shocking himself out of his assumed dream state with a toaster in a bathtub.

Arin exhibits homosexual tendencies toward both Dan and Frank, with the option of going so far as to make out with Frank during the latter's induction into Arin's "D-Club".

Arin also has something of an active bladder and bowels, urinating on himself during random events and during the painting interaction.

On 27 September, 2018, Eek! Games posted on Twitter announcing a contest for fans to audition to join the cast of House Party with a $1000 cash prize for the winners, with one winner each in male and female categories.[1] By this time, the Game Grumps had been releasing House Party gameplay videos (released between March and June, 2018, and had already built a solid following for the game with their fans.

Shortly after the contest was announced, a fan entered Dan into the contest, but the entry was disqualified by Eek!, as the contest rules required entrants to be submitted with permission of the entrant (i.e.: not by a third party).[2]

On 3 October, the Game Grumps announced that they had submitted their own entry into the contest, stating that, if they won, they would donate their prize money to RAINN.[3] They quickly dominated the voting, having already received 32% of the overall votes by the time of their announcement and having 67% of the vote as of 15 October.[4]

Eek! announced via Twitter that the Game Grumps had won the male category, while model and game streamer Lety Does Stuff won in the female category.[5]

About a year later, after releasing the Lety update and coinciding with the Leah update, a Twitter message was posted by Eek! teasing the addition of the Game Grumps to an upcoming version on 5 October, 2019,[6] with more teasers released over the next few weeks.[7][8][9]

It was announced on 4 November, 2019, that Eek! had completed the scripts for Arin and Dan's characters, and had sent them to the pair for approval, with VA to follow.[10] A few days later, they teased some of the content they would include with the Game Grumps' characters,[11] as well as some testing images that December.[12]

The Game Grumps started releasing their own gameplay videos of the game with the updates on 15 May, 2020.[25]

Bringing the Game Grumps to the party[]

See also: Return of the Grumps

After getting Rum for Katherine, she can reveal that, rather than being at this party, she should be at BJ Scooters Tabletop Gaming and Buffet to see Game Grumps Live. She can tell you that she was ditched by her boyfriend to go to the event alone with her ticket. Later, she conceives a plan to bring Dan and Arin to the party by jamming the control signal of the hot-air balloon taking them to the event.

Complete her opportunityGame Jam and the Grumps will arrive at the party. The Grumps take a hard landing in the backyard, then immediately start trying to find their way out of the party and back to their show, enlisting the help of the Player.

Events and Interactions in House Party[]

Katherine can also interact with the Game Grumps, relating to Arin as they have both worked at Blockbuster in the past.

Arin can also have a minor reaction to Katherine's dialogue with Rachael about Madison's artistry and Katherine's pedantry ("Uhm, it wasn't a metaphor, it was a simile.")

Katherine also takes steps to ensure the Game Grumps can't leave the party, revealed during the VR path of the opportunity Return of the Grumps.

The Grumps can comment if they walk in during a topless photoshoot with Katherine, identifying her as someone who entered the Game Grumps Biggest Fan contest over a dozen times.

Derek can offer a suggestion for how to get the Grumps out of the party, directing your attention to an item that fell from the Grumps' hot-air balloon. Derek can also give criticism about Arin's plan to jump over the fence. Derek can also try to clear up Dan's understanding of what a furry is.

If you get Arin drunk, he and Frank have a conflict which can result in either Frank fighting Arin as a boss character, or Frank attempting to join Arin's D-Club (see achievement D-Club Certified).

Arin can have a brief interaction with Ashley asking for the location of the bathroom.

Dan and Arin can attempt to comfort Brittney. Unfortunately, Dan makes the situation more awkward, and the two leave her alone.

Arin ridicules Amy over the nature of her scavenger hunt, while Dan accidentally implies he has engaged in kidnapping for such a challenge.

While Arin is in a trance with the painting, Leah can suggest that, while her role prevents her from slapping a celebrity, you, as the Player, don't have this restriction.

Lety has special dialogue for the Game Grumps during her easter egg ending.

Arin tries to network with Madison as a fellow artist, then recants over her pretentiousness. Dan and Arin can also attempt and fail to bring peace between Madison and Ashley with a song about sibling friendship.

Arin can try to clear up a misunderstanding with Stephanie over the nature of he and Dan's series "The 10-Minute Power Hour". Dan can also comment during your interactions with Stephanie.

Arin and Dan are in disagreement with Patrick over his views of Frank's bisexual tendencies in the modern age:

Patrick: Look, I know it's 2018, but how can Frank be into both guys and girls at the same time? I mean, pick a lane brah. Nah, only kidding!
Arin: Hey man, a mouth is a mouth!
Dan: Any port in a storm!

The Grumps can also pitch an acting role to Patrick as the Diddle Kid. Patrick declines, citing his probation. He counters to play a sidekick character, "The Brahmingo"; Arin declines, stating that "Diddle Kid always works alone.."

Rachael can interact with the Game Grumps, being flirty with Dan before Arin redirects Dan to their task of leaving the party.

Arin can confess to Dan that he has watched Internet videos featuring Vickie.

Dan and/or Arin can comment or interact on the following events:

Arin and Dan have various "shenanigans" they can engage in without other guests, including:

The primary (and only) opportunity is Return of the Grumps. It can be resolved in three ways with different reactions and rewards.

In background chatter, Dan can lament how the game is going to defeat him, and that "Ross" must have designed it. This is a reference to animator and game streamer Ross O'Donovan, AKA RubberNinja, a friend and frequent collaborator with the Game Grumps, who has released several exceptionally difficult Mario Maker levels played by the Grumps on their channel.[26]

When the pair find Madison's painting in the Art Room, they will identify the subject as "Spoiler Owl". This is a reference a joke made during their playthrough of The Legend of Zelda: Majora's Mask.[27]

Arin can get hypnotized by the painting in the living room. This is inspired by a recurring gag during their original playthrough of House Party.[28] The artwork is by artist Veera Armola; a larger image of the painting can be found at https://www.artstation.com/artwork/B1ogD. The event also references Zognoids, a joke that Dan and Arin made during a Tool concert and referenced in one of their episodes.[29]

The Grumps can reference the Diddle Kid, a character Arin invented in episode 18 of their playthrough of Super Mario Odyssey.[30]

During the Penguin Campaign encounter, Arin adopts a Gollum-like voice for "Nipdipikus the Frosty One". This is a reference to a gag he used during the Game Grumps' original playthrough of House Party.[31]

Dan can find the various coats in Madison's closet, and the two can talk about a new goal of having enough coats for any situation, including as gifts for their own guests. This is a reference to a comment Arin made about making awkward small talk in public. They can also mention this during random background chatter.[32]

During commentary on their gameplay of the game after their characters were added, Dan states that, citing Dan's attraction to Rachael during their earlier playthroughs, dialogue was written where Rachael and Dan would flirt with each other. Dan objected to this, as he felt it would be disrespectful to his real-life girlfriend. In the released content, Dan ignores Rachael's advances in favor of trying to leave the party. 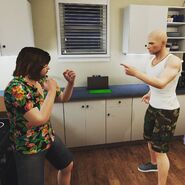