Lety is a character in House Party. Lety is Ashley's Spanish teacher can be summoned via the computer up by where Brittney is..

- Talk to Madison to meet her.

- Talk to Ashley and select "You're Madison's sister? I never would have guessed. You're way hotter than she is!" Then ask her "What's the deal with you and Madison anyway?"

- Talk to Derek, and then talk to him again and ask "You and Madison? Anything ever happen there?"

- Talk to Brittney and ask if she's okay. Tell her her top looks great on her. Ask her if she's okay, then talk to her again and ask her about Amy.

- Talk to Frank and tell him you're sober.

- Talk to Patrick and tell him you'll help him find painkillers. Then talk to him again and ask him about Frank followed by asking how he's able to hide his bottle from Frank.

- Wait for around 3 minutes until a message pops up saying "You hear the *thunk* of a car door from somewhere out front … could that be Lety?" Head then towards the front house door where she'll walk inside.

- Talk to Lety who's at the front door and she'll give you the Whizbangers.

- Wait for Ashley to approach you or find her and she'll warn you about Lety being gullible and you need to watch out for her.

Opportunity: "Just in the Kick of Time"[edit | edit source]

- Immediately follow Lety and Leah to the backyard and approach them when they start talking.

- Quickly open the inventory "I" and select the Whizbangers and choose "Throw One" where it will appear in your hand.

- Make sure you're very close to Leah and aim the whizbanger at her throwing it hard enough by holding "Right Click" and letting go.

- Prepare to immediately begin running into the house and keep running until Leah gives up chasing you.

- Find Lety again and talk to her where she'll ask you to find out who the host of the party is.

- Wait for around two minutes and then talk to Lety and ask her "You're not just gonna let me loose without some kind of clue, right? You could at least give me a juice box or something …" She'll then add to your inventory the Sleazy Sancho, El Escorpion Mezcal, and Mama Chupacabra's.

- Talk to Lety again and ask her "You know how I'm an idiot, right? Well I'm gonna need you to repeat what you need from me." then tell her Madison's the host, and tell her to give Madison the "Shit-Talking Fish!"

- Follow Lety into the garage where she and Madison will talk. After their conversation, Lety will approach you and ask to find out who Madison's boyfriend is.

- Follow Lety and Madison upstairs and wait for them to finish their conversation. Talk to Lety and tell her it's Derek and Madison.

- Follow Lety as she looks for Derek. Once she finds him and they start conversing, quickly get very close up to Lety, aim your cursor at either her chest or rear and press "Right Click" to grab it.

- Patrick will approach you and tell him to get out of here. Wait for a couple of minutes for her to finish talking to Derek, then she'll walk into the living room with the fireplace. She'll then approach you drunk and you'll lose the El Escorpion Mezcal from your inventory.

- Talk to Lety and ask her to meet Brittney. Then tell her to offer her the Chilli Peppers.

- As soon as you either finish watching them make-out or orgasm, Patrick will rush in and start talking to Lety.

- Quickly get close behind Patrick and 'Right Click' his rear, then put the Chili Peppers in his pocket. This will unlock "The Elder Bruh" achievement. After the fight, Lety will approach you to talk.
-- Alternatively, quickly run to Frank and tell him that Patrick is either hiding a bottle or called him an ass-licking monkey. Frank will then rush to beat-up Patrick.

- Talk to Lety and ask her "Yeah, remember the host of the party? Her room's free." so to have sex with her.

- Follow Lety into Madison's bedroom. Once she's on the bed, talk to her and she'll get nude. Remove all of your clothes, interact with Lety, select "Fuck" and proceed to have sex with her. Either right click on her or talk to her during to switch positions.
--Note: Having sex with Lety is one opportunity to have Frank see you to convince him you're not gay to get the condom from him.

This will allow you to have sex with both Lety and Rachael at any time and even watch them do it together. However, enabling this will abandon all other Opportunities you've had and you won't proceed any further except for having endless sex with the two.

Warning: Do not engage in fighting as Lety will then begin to hurt you.

Lety is based off the real-life internet streamer and influencer 'Lety Does Stuff', and is also voiced by her. Lety, along with Arin and Dan, were the winners of a competition held by Eek! Games to vote for people to be immortalized as characters in the game, with winners announced on November 2nd, 2018.[1] 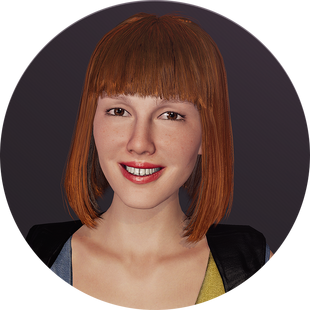 Retrieved from "https://house-party.fandom.com/wiki/Lety?oldid=1461"
Community content is available under CC-BY-SA unless otherwise noted.